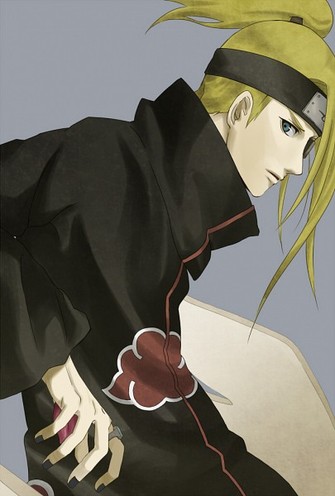 ﻿﻿Name: This rebellious blonde is known for many things, his capability to destroy things, wild yet calm demeanor in battle and his affiliation with a terrorizing group. This young man only goes by one name; Deidara.

Gender: He is male, one may confuse him with another gender because of his lengthy hair but it's certain that he sees his hair as art along with everything else that has to do with him.

Birth date: The day of reckoning, May 5th.

Personality: During his partnership with Sasori, Deidara usually showed a cool, and relaxed attitude, never losing his smirk even while fighting an intense battle or when being blamed by his partner. However, his personality seemed to change to some extent after being partnered with Tobi, as he would easily get mad at his partner’s childish and sometimes disrespectful behaviour. He also had something of a sadistic arsonist nature, rather he was not above enjoying a good fight, and he often blew up his opponents in a very brutal fashion. Deidara's most distinctive trait, however, was his love of art. He would respect any form of it, even if it disagreed with his own. Deidara also had a habit of ending his sentences with nasal-like grunts (…うん, …un), roughly translated as "yeah" or "hm". The latter of which is used in the VIZ version. Deidara also seemed to respect the ideals of others as he allowed Gaara to move the sand he used to protect his village into the desert before kidnapping him, even going so far as to admiringly call him noble.