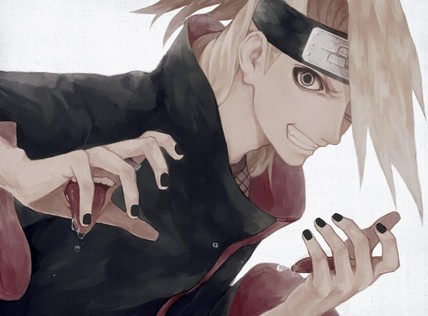 Deidara had slanted blue eyes and very long blond hair which he wore drawn into a half ponytail with the rest hanging down freely. The bang hanging over his left eye is what concealed his scope signifying that he was a long-range fighter, but, as shown in his fight with Sasuke, it was not permanently attached to his face. He also had mouths in each of the palms of his hands which were used for moulding his clay and under his cloak he wore a utility belt with two bags where he carried all of his clay. Deidara had one of his arms crushed by Gaara's sand,[18] and the elbow of his other arm was blown into another dimension by Kakashi's Kamui. Deidara had his arms restored by having Kakuzu sew what was left of his arms with what appears to be a transplanted arm.His transplant was dark brown and had several wrinkles on it.Under his cloak, he wore a V-neck, sleeveless, midriff shirt with mesh armour underneath it along with pants, stirrups, and sandals.

On the left side his chest he had a large, stitched-up mouth for setting off his self-destruct technique. On his right index finger was his Akatsuki ring, which bore the kanji for "blue or green" (青, ao) and was teal in colour. He wore black nail polish on his fingers and toes.

While joining Akatsuki, Deidara wore a blue and grey kimono jacket with a fishnet undershirt inside and khaki pants with sandals and a belt-like pouch with a chain. His blond hair was also tied into a lower ponytail and an Iwa forehead protector.

After Kabuto reincarnated him, Deidara displayed the black sclerae and darker irides seen in other reincarnated shinobi, due to the talisman placed into his head. Deidara no longer wore his forehead protector resulting in his hair being looser, although it was still kept tied into a ponytail. In place of his previous clothing, Deidara, like the other reincarnated Akatsuki members, wore a red cloak with white lining. During the anime-exclusive Chikara Arc, he originally wore a black robe with red lining before wearing the red cloak for the remaining of his servitude under Kabuto before and during the Fourth Shinobi World War.