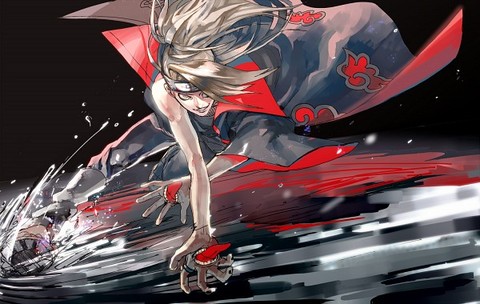 Deidara was a very powerful S-rank missing-nin whose abilities earned him recognition within Akatsuki, even being praised by the leader, Pain, who openly admitted that he was something unique, and that his loss was a major blow to the group. Acting on his own, Deidara was able to fight and defeat Gaara, the host of Shukaku and Fifth Kazekage, one-on-one. He was also able to defeat and capture Isobu despite fighting in its home territory. He also managed to fight on equal grounds against Sasuke Uchiha, a prodigy of the Uchiha clan.

Deidara possessed the Explosion Release kekkei genkai. This allowed him — by simultaneously using two (currently unknown) chakra natures — to give his chakra explosive qualities. Deidara also possessed special mouths in the palms of his hands and on the left side of his chest as a result of stealing and using a powerful kinjutsu from his village on himself. By commonly using these two special abilities in unison, he could create explosive clay: clay infused with his explosive chakra that detonated with the command Katsu (喝) and the seal of confrontation. This clay could be moulded into a wide variety of shapes and forms, growing to large sizes when infused with chakra (with Deidara performing the necessary hand seals), and could be controlled at will. This allowed him to create living explosives to attack opponents at long-range.

Deidara wore a scope on his left eye for long-range observation, and he had trained the eye itself to counter genjutsu, allowing him to see through and negate them. When he did this, his pupil would contract. This training was done in order to counter Itachi's powerful genjutsu skills, of which he had a considerable loathing, and wished to defeat if he got the chance. Deidara seems to be able to see long distances without his scope as after being reincarnated, he found enemy shinobi lurking near Tobi's hideout; he still needs to close his right eye in order to use his left eye for long distance vision.[29]

As a long-range specialist, Deidara was weaker in close combat, but he was skilled enough to fend off a close combat battle against specialists like Team Guy, despite having lost both of his arms prior to their confrontation (albeit he was completely on the defensive), using only a kunai in his mouth and a variety of techniques in his arsenal to escape close-quarters when necessary. He could also avoid a blitz by Sasuke, though he noted the Uchiha's speed was too fast. Deidara also had great endurance to pain, being able to keep focused after having both his arms torn off. Along with his endurance to pain, Deidara also had great physical strength, able to pull himself free from Gaara's chakra-infused sand and sever what was left of his arm at the same time, and dislodge two giant shuriken from his arms using his feet.